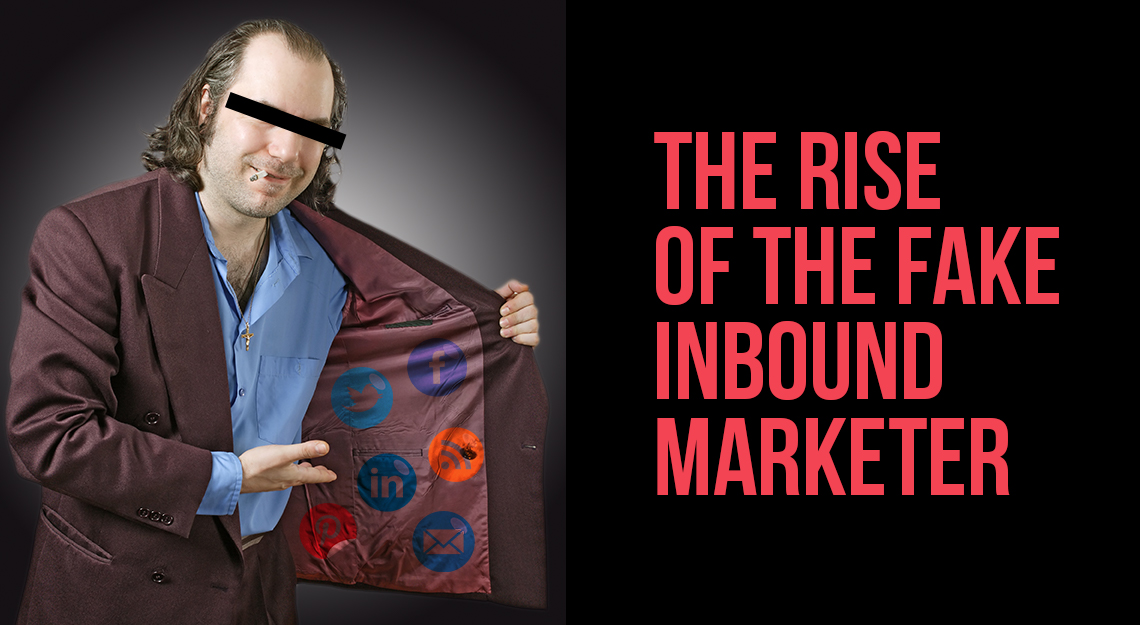 Inbound marketing is a methodology proven to increase ROI and leads, but how do you spot the genuine inbound specialists in a marketplace saturated with amateurs?

Inbound marketing. The magical methodology that turned marketing on its head.
With the emergence of digital technologies, buying behaviours changed and marketers needed to adapt to this ‘information age’ governed by smartphones and tablets. Content was in abundance, and content is what the world wanted, but it needed to be fast, accessible, interesting and digestible to coincide with the faster pace of society; a society fuelled by Starbucks and free WiFi. And with that, inbound was born.

On that note I would like to assume that you follow some sort of blog, so whether it’s marketing or lifehack blogs, there’s something about seeing “10 Ways to Do XYZ Better” in your inbox that’s all too tempting to resist. But are these 10 ways really the better ways?

This is where my problem lies with Inbound – every Tom, Dick and Harry claims to be an inbound marketer, diluting the space between an expert and a Del boy. So when content marketing began to market inbound marketing, inbound essentially became the fad, the trend, the latest gadget. Every marketing department subscribed to agency blogs left, right and centre, inhaling the listicles like a giddy addict, and soon enough, they were ‘doing inbound’. What I call the ‘Inbound Marketing gravy train’ has generated new breeds of marketeers; ones that businesses should be wary of. Remember; in the land of the blind, the one eyed man is King…

…the ‘Inbound Marketing gravy train’ has generated new breeds of marketeers; ones that businesses should be wary of. Remember; in the land of the blind, the one eyed man is King…

One of the main culprits of this inbound marketing gravy train is the Ex – story of our lives!

One minute you’re giving them everything they need and more, the next they’ve left and taken your intellectual property with them. It’s a classic case I’ve seen time and time again. Reason being, they have likely seen an opportunity to make money.

Someone has told them all of this inbound marketing stuff, and without thinking about how they’ll actually deliver each element, they’ve rushed into opening up an agency positioning themselves as new and pioneering. It’s disappointing to see such poor execution of everything you taught them. “The website is a user journey; workflows should be smart and the UX impeccable” – so my heart does sink a little when I see websites with poor navigation, shoddy layout and crap design. These guys are victims of the marketing chinese whispers. They learn their trade from hearsay and watching somebody else do it. They haven’t been practising inbound marketing at all, they just know the basic theory. It’s like understanding that you have to shift gears in a manual car for it to work, but never having shifted them yourself. Get ready for a lot of stalling!

“The website is a user journey; workflows should be smart and the UX impeccable” – so my heart does sink a little when I see websites with poor navigation, shoddy layout and crap design

In essence, all these guys aboard the inbound marketing gravy train are there to make money – quick time. But inbound marketing isn’t a quick fix for anything; profit or the client’s ROI. Building shareholder value through an opt-in community, growing a social network, becoming a thought leader and creating a smart user journey that turns leads into customers doesn’t happen overnight.

It’s basically just jumping on a fad because they’ve seen experts do it right, but the only way these business owners will be safe is if their clients are less than familiar with inbound. Just remember; these guys are learning the fundamentals on the job. You’ve ultimately allowed an apprentice to service your marketing needs and take your budget.

The Agency That Do a ‘Bolt-On’ Inbound Programme

*ALARM BELLS RINGING* So here’s your traditional print, design and web development agency now saying they will do a bit of inbound on the side at an extra cost. Let’s be really frank here; they’re not going to be doing inbound marketing. They will produce a few mediocre blog posts that include a few keywords and Bob’s your uncle. As found in the 2015 Mad Men to Sad Men survey conducted by IPA, clients preferred agencies to embrace what they’re good at, stick to it and become exceptional. The 4 step methodology of Attract, Convert, Close, Delight is too complex to be implemented on the side. Things such as ‘PR Support’ are a bolt on. Not an entire marketing methodology that requires time, resource and more importantly expertise.

For inbound to work you need a savvy SEO team, awesome content, innovative design, web developers that understand the importance of user journeys and a social media and outreach team that know their stuff and are not a fleeting array of interns. And that’s just the start. To offer inbound marketing as a mere bolt-on is akin to offering fish as an extra cost to your fish and chips.

Top Tip: Stay away. These guys have read a post or two on inbound and sort of understand they should be doing it, so they’ve offered it as a service to probably boost their own website’s ranking, but more importantly to make money off the naivety of unsuspecting new clients who know less than they do.

To get inbound right – which can and should be done as companies are 3x more likely to see increased ROI compared to outbound campaigns – isn’t as easy as just setting up a blog and waiting for an audience. And I’m not talking about your Fortune 500 companies here. I’m talking about your SME/SMB with a small in-house marketing team who are forced to innovate in how they win new business in this digital world we’re in.

Inbound marketing costs a lot, despite it costing 63% less per lead than outbound. Cash strapped businesses are looking for ways to reduce costs, but still do some sort of inbound marketing, but inbound doesn’t work like that. It needs your full attention and a lot of your budget. Content marketing normally is the go to solution, but with 71% of businesses creating more content in 2015 than ever before and only 12% of those feeling like they have an actual plan, it’s evident it’s time for a company brainstorm and a shed load of coffee.

That said, Joe Pulizzi claimed back in 2011 that inbound will only get you so far and it’s content that takes you all the way to a sale. But don’t they both actually need one another equally to drive results? Creating awesome content for all stages of the buying journey is fab, I applaud you, but inbound is critical in attracting, nurturing and maintaining an audience. Without an audience, you’re not a star.

“Doing well with blogging is not about writing one key post, it is about performing day after day and helping a few people at a time”. – Aaron Wall (@seobook)

The Consultancy That’s So Last Year

Inbound marketing has evolved over the past few years as the internet collectively garners data to prove and disprove techniques. But to the agencies out there still repping their 5,000 word white papers, it’s time to pull your heads up from your beige desks and snap out of your beige existence.

The internet is saturated with the same old basic content being churned out in content sweatshops, hence why top companies have had to innovate. (Fun fact; 68% of companies still rate their content as basic and inconsistent!) But innovation shouldn’t be implemented on a whim. These companies that succeed in creating a viral video or an intriguing eGuide have done their research and have all fingers on the digital pulse. I’d be skeptical of an agency still living in the ‘What is Inbound Marketing?’ era and creating 300 word blog posts. It’s also getting tedious seeing the same shutterstock images floating about. You know the ones, a guy in a suit touching a screen with an explosion of ‘digital stuff’ surrounding him; the call centre-esque lady with a beaming smile that just screams ‘I don’t work here!’ People know now. They just know. And they want more. Content has to be worthy of a Samuel Johnson Prize these days; cutting edge, revolutionary.

It’s not just about content though, it’s about the whole inbound process. Agencies that post the same message on every social media platform at the same time? Bye. Agencies that have an email list straight out of the 80s? Not a chance. Agencies that think SEO is all about keywords? Just stop. Right. There.

The Marketer That Sells You Inbound, Regardless

Inbound marketing is all about adaptation, and experimenting with what works best for your brand or for a client; it’s not one size fits all. With a preconception that inbound marketing is amazing so therefore every business must need it, many marketers are selling a fixed inbound marketing methodology with no thought behind what is actually right for their client. Following the latest trends does show initiative, but it’s the correct implementation of them that shows expertise. The user journey should be mapped to coincide with the buying cycle, not mapped to coincide with what the marketer is capable of doing, and it’s because of this where we’re seeing an increasing divide between the client and agency relationship.

Debbie Morrison, ISBA’s Director of Consultancy and Best Practice stated in response to the 2015 Mad Men to Sad Men report that clients are “frustrated that their agencies don’t listen when they explain that their world has changed and, instead, simply try to sell services that the agency is equipped to provide rather than what the client needs.” The word ‘equipped’ really stood out to me. The agency has some equipment and a few skills and that’s it, that’s all they can offer regardless of the client’s niche. Being flexible but still honing all the best practices of inbound is the balance clients are looking for, not a methodology template with no give or take.

“Marketing isn’t magic. There is a science to it.” –
Dan Zarrella (@danzarrella)

I’d like to stress that I am not anti inbound. There are both small and large marketing agencies alike out there that know what they’re talking about, the veterans if you like! And being a perfectionist I just like to see it handled with care, where agencies fully understand their client’s world and have the expertise to follow through on all proposed activity. The inbound delivery engine takes so long to set up and perfect, but in this ever fluctuating industry, that model needs to be agile so you can respond to content and buying behaviour changes without any disruption to your clients’ performance. Now, I never said this was easy, but the old saying each and every one of our parents said to us that we greeted with a disgruntled moan is that you only get out what you put in.

Many agencies and consultants similar to the above are talking the talk about inbound marketing; they’re only putting words into the system. Words are great at a pitch, but after that it’s all about action and performance.

At Koncept we offer a Full Service Marketing Studio and Consultancy to help transform your prospects into customers and create a seamless brand identity driven by 20 years experience in the marketing space.

We’re quick thinkers, idea masters and brand builders, with a sharp eye for detail. Not only do we love what we do, but we thrive on it, putting our creative and technical expertise into motion to increase your ROI and customer base.